The one and only – get that Friday feeling every day!

What is there to say about this British classic? There’s nothing quite like the unique taste – and texture – of Cadbury’s Crunchie. Sweet, melt-in-the-mouth honeycomb that snaps with a satisfying crunch as you bite into it, covered with Cadbury’s famous milk chocolate. Created way back in 1929, it’s been a massive favourite ever since.

What is a Cadbury’s Crunchie made of?

In Ireland and the UK, the Crunchie is universally known and beloved. But there’s really nothing similar to it in Germany, so if you’ve never tried one before, we’ll try to explain what it’s like. The main component of the Cadbury’s Crunchie is something we call “Honeycomb”. Despite the name, this isn’t actually made from the stuff you find in beehives – it just looks a little like it. It’s actually a very special form of toffee with the texture of a hard sponge. It’s full of tiny bubbles of gas, which make it very light, but also hard and – as the name suggests – crunchy.

This finger of honeycomb is then coated in a nice, thick layer of Cadbury’s chocolate, to make a uniquely delicious treat.

Manufacturing the Crunchie bar is quite tricky, and perhaps that’s why only Cadbury have mastered it. Honeycomb tends to shatter it if you cut it with a knife or a saw, and this is why it’s usually sold as irregularly-shaped pieces. So if you can’t use a blade, how about a high-pressure jet of water? No, that won’t work either, as it would dissolve the sugar. Instead, to make consistently-shaped bars, Cadbury had the ingenious idea to use oil instead of water.

At Dalriata, we sell the standard 40g bar, not the snack size or the slightly-smaller multipack bar, so you get more Cadbury’s Crunchie for your money. These are a big favourite with our customers and always sell fast, so get them while you can! 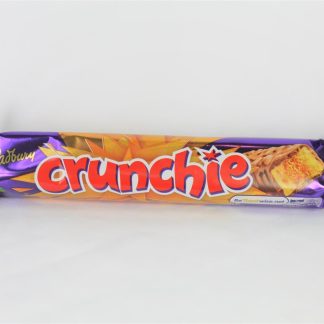 You're viewing: Cadbury’s Crunchie 1,50 € incl. VAT
Add to cart
Annoying Cookie Pop-Up
Is it OK if we use cookies to give you a better onsite experience?