Now here’s a biscuit with a turbulent history! Jacob’s Club Milk biscuit has been an essential companion to millions of Irish cups of tea for over a hundred years now. But in that time it’s been through all sorts of changes – different packaging, different formulations, different flavours, even different manufacturers. It’s been a wild ride, but Jacob’s Club Milk is now back home in Ireland, in its rightful place as the first biscuit picked up off the plate at every tea time!

What is a Jacob’s Club Milk biscuit?

Just before the First World War, W R Jacob and Company introduced the Club Milk biscuit. Consisting of two Marie-style biscuits with a layer of cocoa cream in between, covered in a thick coating of chocolate, they were an instant success. Soon they started finding their way across the water into England, and took off there too – it wasn’t long before Jacob’s started producing them in their factory in Liverpool to meet demand.

Over the years, Jacob’s UK operation introduced several varieties of Club biscuit which were never available in Ireland. As well as the original Club Milk, British biscuit fans were able to enjoy Club Mint, Orange and even a fruit variety containing raisins and sultanas. These were sold all over the UK, including Northern Ireland, but never made it back to their homeland. So Irish folks are generally only familiar with the Club Milk Original you see here.

In the intervening time, the Jacob’s brand changed hands a few times, with disastrous consequences for the Club biscuit. Instead of the double biscuit which makes these so special, the new owners started making them with just a single layer of biscuit, coated in a thinner, lower-quality chocolate. They simply weren’t as satisfying any more. Luckily, after some time, production resumed in Ireland, using the original, beloved recipe, and it’s stayed that way ever since.

We’re old enough to remember a time when each Jacob’s Club biscuit came wrapped in two layers of packaging – an inner foil, and an outer paper sleeve. Alas nowadays the wrapper is just a single layer, but luckily the bar inside is as tasty as ever, and that’s the most important thing.

On many a school morning, a Club biscuit found its way into the school lunchbox. Rarely did these delicious treats make it until lunchtime, however – often they were surreptitiously scoffed in class well before breaktime!

We think the really unique thing about these biscuits is the sheer quality. Not one but two layers of crunchy biscuit, and a very generous coating of velvety chocolate makes for a satisfying treat. There’s something really luxurious about these chocolate wafers, and in some ways they remind us of Germany’s own superstar biscuit, the Choco Leibniz – but obviously better!

As the old ads used to say, if you like a lot of chocolate on your biscuit, join our Club. Buy some today! 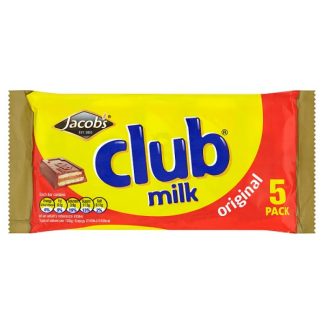 You're viewing: Jacob’s Club Milk Original 5 pack (plus 2 free) 3,50 € incl. VAT
Add to cart
Annoying Cookie Pop-Up
Is it OK if we use cookies to give you a better onsite experience?