Cadbury’s are one of the world’s best-known and most beloved producers of chocolate snacks.. The company was founded in England in 1824, and to most people it’s as British as can be. But did you know that Cadbury’s have also been making chocolate in Ireland for nearly a century? And that there are some Cadbury’s products which are exclusive to Ireland*, such as the Golden Crisp?

It’s made using deliciously creamy Cadbury’s Dairy Milk chocolate, famous and beloved all over the world. But of course, this is Irish Dairy Milk, made with Irish ingredients, and some people will tell you it’s even better as a result! Dairy Milk is made, as the old ads used to say, with “a glass and a half of full cream milk in every half pound”. Put another way, this means 426ml of milk in 227g of chocolate.

But the real magic here isn’t the chocolate, even though it’s as great as always. What makes the Golden Crisp special is the tiny chunks of honeycomb which have been mixed into the chocolate. Each Cadbury’s Golden Crisp bar contains just the right amount of the crunchy goodness – enough to make things interesting, while still allowing the Dairy Milk chocolate to do what it does best.

These are super popular in Ireland, and we sell plenty in our Berlin store, so it’s hard to understand why Cadbury’s Golden Crisp isn’t to sold in the UK. It surprises and intrigues many of our British customers, who can’t understand how we get our hands on Cadbury’s products they’ve never seen before. But everybody knows it’s hard to go wrong with Cadbury’s, and usually once they give it a try, they love it. Because let’s face it, what’s not to love? It’s as if they’ve squeezed dozens of tiny Crunchies into every bar!

So whether you already know and love Cadbury’s Golden Crisp, or you’ve never heard of it, why not throw  one (or a few!) into your Dalriata shopping basket today? We’re sure you’ll enjoy it.

* Cadbury’s Golden Crisp may be available in South Africa as well, we haven’t checked… 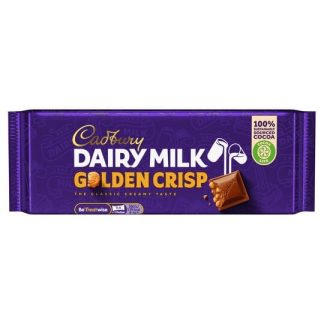 You're viewing: Cadbury’s Dairy Milk Golden Crisp 1,80 € incl. VAT
Add to cart
Annoying Cookie Pop-Up
Is it OK if we use cookies to give you a better onsite experience?