The name Cadbury’s Dairy Milk has become a byword for delicious chocolate. Cadbury products can be found all over the world, from the United Kingdom to Australia and South Africa, and many places in between. For most people it’s a quintessentially British brand, and indeed the company was founded in England in 1824. But believe it or not, Cadbury’s have also been producing their famous chocolate in Ireland for over a hundred years.

In fact, their Irish operation makes some products that aren’t even available in their homeland of the UK, such as the Golden Crisp and Mint Crisp. You should definitely give these a try if you’re not familiar with them – they’re also made with Dairy Milk chocolate, and they’re absolutely delicious. But if you want that pure, velvety chocolate experience, Cadbury’s Dairy Milk is what you’re looking for. What’s more, this is Irish Dairy Milk, made with Irish ingredients, and many people are convinced it’s even tastier!

Cadbury Dairy Milk chocolate is made, as they used to say in the old commercials, using “a glass and a half of full cream milk in every half pound”. In other words, that’s 426ml of milk in 227g of chocolate. It’s this generous dose of milk which gives Cadbury’s chocolate its legendary richness and makes it Britain’s favourite chocolate, year after year.

And it’s this which makes Cadbury’s Dairy Milk really special. It may not be the fanciest, most sophisticated chocolate. It may not be made using the most exclusive ingredients. But if you ask us, it’s the best in the world at doing what chocolate is supposed to do – little bite-sized bursts of exquisite pleasure.

Although they’ve recently changed the shape somewhat, this is the same Dairy Milk chocolate bar you’ve known and loved since the very first time you tried one. Although the new shape is a little thinner and less chunky than the old one, each individual bar weighs exactly the same. In a world where it seems like everything is getting smaller and more expensive, it’s great to see that the Dairy Milk bar isn’t cutting any corners.

There are no compromises with the ingredients, either. It may be a new bar, in a new wrapper, but the taste is the same as ever. After Mondelez bought Cadbury in 2010, many feared that they would replace the classic Dairy Milk formula with a new chocolate, but that has proven not to be the case. It’s still as good as ever – and now you can remind yourself just how good it is. Add one (or a few, we won’t judge you…) to your order today! 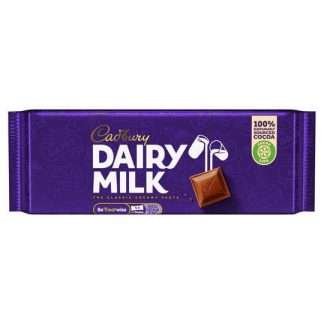 You're viewing: Cadbury’s Dairy Milk 1,80 € incl. VAT
Add to cart
Annoying Cookie Pop-Up
Is it OK if we use cookies to give you a better onsite experience?