Fish and chips just isn’t right without it.

Sarson’s Malt Vinegar is ubiquitous in the UK. That unique and iconic bottle shape is a familiar sight in practically every café, pub and chip shop in the country. Almost every household in the country has a bottle somewhere – maybe in a kitchen cupboard, maybe in permanent residence on the dining table.

It’s so common that British people tend to take it for granted. It often comes as a surprise to them that malt vinegar is a peculiarly British thing. It’s so absolutely normal in the UK that people expect that it will be just as easy to find anywhere else. But of course that’s not the case. Here in Germany it’s a pretty exotic condiment, and certainly not something you can just pick up in any supermarket. Turns out malt vinegar doesn’t really exist outside the UK and Ireland.

It makes us sad to imagine how many people around the world must have eaten their fish and chips without malt vinegar. They’re really missing out on a key part of the experience! Sure, there are other kinds of vinegar, and they’re very tasty too. But even though cider or balsamic vinegar are delicious, when it comes to fish and chips, they just aren’t the right thing for the job! It’s got to be good old malt vinegar.

So Sarson’s Malt Vinegar is the perfect accompaniment to fish and chips, we can all agree on that. Steaming hot, battered cod or haddock on a bed of fat chips, covered in plenty of salt and vinegar – it’s probably Britain’s most famous food. But there are so many other ways you can use it. This famous bottle is bursting with tangy, nutty flavour and is just the thing to liven up all kinds of dishes, from fry-ups to pies.

There’s nothing quite like malt vinegar, so let Dalriata bring it to you today!

What is Malt Vinegar?

As the name suggests, malt vinegar is made from malted barley. You might be familiar with some other liquids made from malted barley – beer and whiskey! This vinegar starts off life in the same way, but it’s fermented a second time to give it that characteristic tangy, acidic flavour. Just because all three are made from the same grain doesn’t mean they taste the same. If your beer or whiskey tastes like vinegar, something’s gone terribly wrong!

Having said that, there are certain similarities. Malt vinegar is a dark brown colour like a typical English ale, and also has the caramel and nut aromas you’ll find in some British bitters. But as with any vinegar, the main characteristic is a sharp, acidic taste and smell. It’s this which makes it the perfect addition to fish and chips – the acid cuts through the fats and brings out all the flavour locked inside that crispy batter.

What is Malt Vinegar used for?

We’ve already talked enough about fish and chips, so let’s look at what else you can do with this special kind of vinegar. 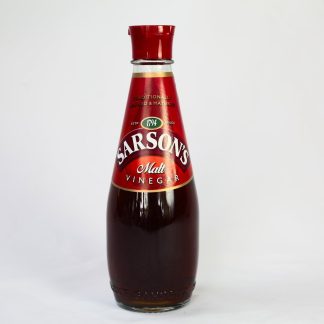 You're viewing: Sarson’s Malt Vinegar 2,90 € incl. VAT
Add to cart
Annoying Cookie Pop-Up
Is it OK if we use cookies to give you a better onsite experience?