Only 1 left in stock (can be backordered)

Yellow Spot Whiskey has a long and interesting history dating back to the 19th century.

For a long time, it was only available in a single shop – Mitchell & Son in Dublin. Originally a bakery, this shop later began importing wines to Ireland, before realising that the empty casks would make the perfect vessels for maturing pot still whiskey. They would load empty sherry, port and wine barrels onto the back of a cart and have them towed by horse to Jameson’s distillery not far away. The distillery would fill them up with whiskey and send them back to the shop, where they would be laid down and left to mature in the cellar.

In order to know how long each barrel should be left to mature, the Mitchells would mark them with a “spot” of paint. Blue signified seven years, green was ten, and the yellow spot meant twelve years of ageing.

Nowadays, Yellow Spot is distinguished from Green Spot not only by the extra time in the barrel, but also because it’s aged in Malaga casks in addition to the bourbon and sherry barrels used for its younger sibling. This choice of Malaga casks for ageing is very unusual for whiskey, making Yellow Spot quite unique in how it’s matured. So it’s not just a matter of “same only more so” – Yellow Spot has a distinctive, more complex character of its own. Expect a nose of mown hay, cracked black pepper, nutmeg, clove oil and green tea, as well as sweet honey and peaches from the Malaga casks. On the palate, spices, honey and red apple combine with flavours of creme brulee, fresh coffee and toasted oak.

At 46% alcohol by volume, this whiskey packs quite a punch, so tread carefully! 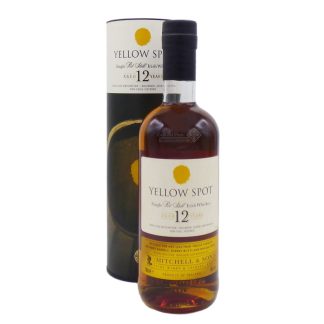