Only 1 left in stock (can be backordered)

Since the turn of the millennium, Irish whiskey has been undergoing something of a renaissance. Where once there was a near-monopoly with just a handful of brands produced by one manufacturer, in recent years new distilleries have been popping up all over the place. One such upstart is the Hinch Distillery in Co. Down.

Although they’re a relative newcomer, the area in which they’re based has a centuries-old history of making whiskey, and Hinch aim to build on the old ways to create whiskeys which retain the smooth drinking characteristics typical of Irish whiskey, whilst adding an uncommon richness and boldness.

This particular variety is a ten-year-old, triple distilled as is common in all Irish whiskey. It spends most of that decade maturing in American oak, before being finished for at least a year in Oloroso sherry casks from the Bodega Garvey in Jerez. The result is a fruity, earthy nose, and a complex flavour with a distinctly nutty character.

Hinch Sherry Cask Finish Irish Whiskey may be a newcomer from a name you might not recognise, but it’s getting rave reviews, with some comparing it to Speyside single malts. This might be the perfect choice if you’re looking to try something new and a little more adventurous. 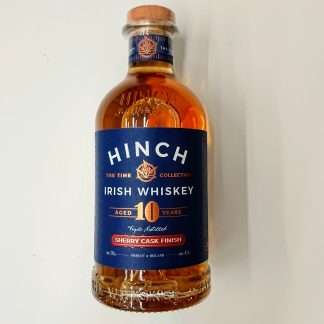