The choice of the dedicated Irish tea drinker.

Barry’s Original Blend is the choice of seasoned tea drinkers all over Ireland. It’s somewhat milder and less malty than Barry’s Gold Blend tea, but just as high in quality, which means it’s ideal if you’re the sort of person for whom nothing is so important that it can’t wait till after a cuppa! Irish mammies might get through ten cups of this stuff in a day, so they really appreciate the gentler but still unmistakeable flavour of this top-notch Irish tea blend.

This light and refreshing tea is made from a blend of fine Assam, Rwandan and Kenyan tea leaves, with the emphasis on the bright, zesty African varieties for a refreshing flavour. It brews to a delightful reddish brown colour, which with the addition of a little milk turns golden. Sweeten with sugar to taste, or add a little honey if you’re feeling fancy.

After over 120 years of blending tea, Barry’s have got it down to a fine art. It all started from just one shop in Cork, with teas sourced from India and Sri Lanka. Over the years, their reputation for quality grew, and they gradually expanded to sell throughout Ireland. In the 1960s they discovered the light, aromatic East African teas, and introduced these to their products. The resultant blend is a favourite all over Ireland. And if a nation of tea drinkers loves it this much, chances are you will too!

Barry’s Original Blend tea is the ideal choice for anyone who loves a good, honest cup of tea every single time.

Until the Second World War, there wasn’t much difference between Irish and English tea blends. Both used a lot of Indian and Sri Lankan leaves, which came through the London tea markets. When the war broke out, Ireland lost most of this supply, and had to find other sources to keep its thirsty citizens happy. They found what they were looking for in East Africa. To this day, tea from Kenya, Rwanda and Tanzania is what makes Irish breakfast tea taste a little different.

These African varieties are a little darker than their Indian counterparts, which means they have a more appealing colour after milk is added.  Many Irish people like their tea on the milky side, so perhaps that explains the popularity of these blends all over Ireland.

In any case, Irish breakfast tea is ideal for anybody who wants a full-flavoured, rich-coloured cup of tea. 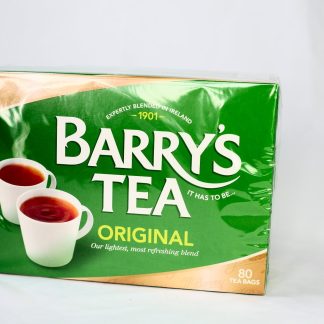 You're viewing: Barry’s Original Blend Tea 80 bags 5,00 € incl. VAT
Add to cart
Annoying Cookie Pop-Up
Is it OK if we use cookies to give you a better onsite experience?