Clotted cream is one of the most popular products at our Berlin store, and it’s something which people will come from far and wide to buy. It was never an easy thing to find in this part of the world, since Brexit it’s become even more scarce. Certainly it’s not in most grocery stores.

Although Berlin is a huge city, and home to millions of people from every part of the world, there are only a handful of places where you’ll find it at all, and even then, supplies can be patchy. There’s no guarantee that a stockist will have some when you’re looking for it.

In fact, some of our customers have told us that even the biggest and most famous department store in Berlin can’t get hold of it!

Dalriata is no rival to a store of that size and reputation (yet!), but at least we can beat them in one small way. We do our best to be a place where you will always be able to find clotted cream, and we’re sure you’ll agree that our prices are some of the best around.

What is clotted cream?

Clotted cream is a delicacy most commonly associated with the southwest of England, in particular the counties of Devon and Cornwall. This is why you’ll sometimes hear it referred to as Devonshire Cream or Cornish Cream. These two counties are very proud of their most famous foodstuff, and have a friendly but intense rivalry over who invented it, whose is best, the correct way to eat it, etc. But whether it’s Devon cream or Cornish clotted cream, you can be sure it will be delicious.

Just like cheese and butter, clotted cream originated as a way to preserve milk and get the most out of it. It starts off as thick cream, which is then put through a special process to make it even thicker.

The trick is to heat cows’ milk in shallow pans for many hours, then leave it to cool. This process forms a thickened layer of”clots” of very rich, sweet cream with a distinctive grainy, almost crunchy texture.

Yes and no! One look tells you that it is extremely thick compared to normal whipping cream. It lacks that light, fluffy character which whipped cream usually has.

It contains about three times more fat than whipping cream – much more than even heavy cream or double cream. It’s this high fat content which gives it that super creamy texture. In fact, it’s so thick that it’s closer to cream cheese in consistency.

In terms of flavour, it has a slight sweetness, but the taste is more like butter than cream. That long, slow baking process means that clotted cream is gently toasted, giving it a very mild nutty, malty character quite unlike any other dairy product.

How do you eat clotted cream?

Clotted cream is most commonly associated with cream tea. This indulgent afternoon snack is a particular specialty of the tea rooms of Devon and Cornwall, but can also be found all over England, and sometimes even further afield. A pot of tea is accompanied by fresh scones, strawberry or raspberry jam, lemon curd, and of course, clotted cream!

(By the way, if you want to try your hand at baking homemade scones, we will have a scone mix for sale very soon. Just follow the simple recipe and you’ll be enjoying a cream tea in no time)

Despite what certain novels and TV shows might have you believe, afternoon tea is not an everyday occurrence in England. In fact, outside of very special occasions, most people would rarely indulge in such decadence. But don’t let that put you off – thanks to us, you can treat yourself to an afternoon tea whenever you like!

Here’s a little tip: for the best flavour and consistency, take your clotted cream out of the fridge an hour or so before eating and allow it to come up to room temperature.

Why is clotted cream so hard to find?

We wish we knew! Sure, Brexit makes matters more complicated, but even before that it was a pretty rare sight.

We know that some people make clotted cream themselves at home. This is certainly an option, and if done right the results will be delicious. However, it’s not a simple process, and it takes quite a long time.

To make things even harder, it’s often difficult to find the right kind of cream in Germany. Most cream that’s available in supermarkets is too light to make good clotted cream. This can mean starting with whole milk, which makes the whole endeavour even longer.

The most common way to produce homemade clotted cream is to heat it “low and slow” in the oven for many hours, then leave it to sit in a cool place for a while afterwards.

This method tends to give the best results, but the problem is that once the process is underway, your oven’s tied up and you won’t be able to use it for anything else. Leaving your oven on for a long time like this can use a lot of energy. In these times of sky-high domestic bills, saving on gas and electricity is important for most of us.

An alternative approach is to use an slow cooker to heat the cream overnight on its lowest setting. Or if you’re in a hurry, you can speed things along with an Instant Pot or pressure cooker.

Really, though, we don’t think it’s worth the bother. Some jobs are simply best left to the professionals. So we recommend you don’t go to all that trouble, and instead, simply pick up a jar at Dalriata whenever the mood takes you!

The great thing about our clotted cream is it comes in an airtight container and has a very long shelf life until you open it. So you can always have a jar on standby in the fridge. So why not add one to your next order of frozen foods? 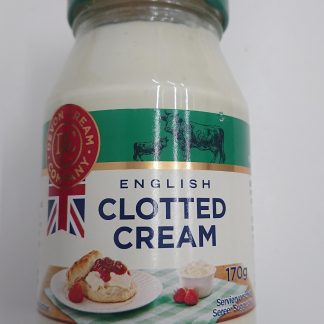 You're viewing: Clotted Cream 5,40 € incl. VAT
Add to cart
Annoying Cookie Pop-Up
Is it OK if we use cookies to give you a better onsite experience?