The original, and still the most popular, brown sauce.

This one needs no introduction! The world-famous HP Sauce is the original brown sauce. It’s been an ever-present on dinner tables all over the United Kingdom since it first went on sale in 1899. You’ll find this stuff in virtually every household in the country, and its fruity, tangy flavour is synonymous with fry-ups and bacon sarnies.

Here in Germany, the HP brand is a common sight in supermarkets, but their range consists of barbecue sauces and steak sauces, rather than the good old brown sauce. Don’t get us wrong, these sauces are tasty too. But when you’re making a sausage sandwich or a bacon butty, it’s just not what you’re looking for. We’re not sure why they don’t sell the original HP sauce here, but fear not, Dalriata has got what you’re looking for!

If you’ve never tried HP Sauce before, it’s a little hard to describe the taste. It’s a complex thing, with many contrasting flavours. Some American customers say it’s closest to A1 Sauce, but it’s not quite the same as that either. There’s something uniquely British about this kind of bottled condiment that folks in other places can’t seem to reproduce. Maybe you’ll just have to buy some and try it for the first time…

What is HP Sauce made of?

As well as the malt vinegar base, the two main ingredients of HP Sauce are tomatoes and tamarind. But just because it’s primarily made of tomatoes doesn’t mean it’s a kind of ketchup – it’s really very different. As well as these two key ingredients, it contains molasses, dates and spices including cloves, mace and ginger. This unusual combination gives HP Sauce a unique flavour that’s sweet, sharp and spicy all at once. There’s a lot going on in that squeezy bottle

Where does HP Sauce come from?

HP Sauce originated in the English city of Nottingham. It was created by a grocer called Frederick Gibson Garton, who had a factory for making sauces and pickles in the suburb of New Basford. Just like the creators of Worcestershire Sauce, he was inspired by some of the flavours making their way back to England from the British Empire’s colonies in South Asia. But his aim was to come up with a table sauce, suitable for adding to steaks, bacon sandwiches or a full English breakfast.

After much experimentation, he came up with a secret recipe which hasn’t changed much since. Since those days, the HP Sauce name and formula has passed through a number of hands, and is now owned by Heinz, but the taste is the same as ever.

How did HP Sauce get its name?

Almost everyone who grew up with a bottle on the dinner table could tell you that the HP stands for… Houses of Parliament! Legend has it that the sauce was being served up in Parliament, and when its inventor heard about this, he decided it would make a good brand name for his product. Over 120 years later, there’s still a picture of the world-famous clock tower of the Houses of Parliament, popularly known as Big Ben. It looks like Frederick Gibson Garton’s marketing was right on target!

The association with Parliament got a further boost in the 1970s, as Prime Minister Harold Wilson was a huge fan of the stuff. He got through so much of it that some people started calling it “Wilson’s Gravy”.

You can find lots of interesting information about the history of HP Brown Sauce on the Museum of Brands website.

How is HP Sauce used?

HP Sauce is most widely used as a table sauce, but it’s remarkably versatile stuff. Some of our customers swear by adding a dollop of it to stews, casseroles or cottage pies. Others use it as the secret ingredient in the gravy they pour on their Sunday roasts. We’re sure you can think of a few possibilities of your own besides. Try it on your own favourite dish and let us know how it goes!

Do you sell HP Sauce in the classic glass bottle?

Although HP Sauce usually comes in an instantly recognisable, iconic glass bottle, at Dalriata we offer it in a larger, squeezable plastic bottle. This saves transportation weight and means we can offer you a larger size and better value for money. It’s also more convenient than slapping the bottom of the glass bottle and waiting!

So if you’ve been hankering for some good old brown sauce on your dinner and struggled to find it, don’t worry, Dalriata will get it to you no matter where you are in Germany. 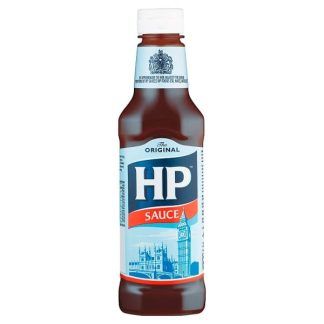 You're viewing: HP Sauce Squeezable Bottle 450g 4,90 € incl. VAT
Add to cart
Annoying Cookie Pop-Up
Is it OK if we use cookies to give you a better onsite experience?