A vegetarian alternative to black pudding.

These days it seems like there’s a vegetarian alternative to all kinds of traditionally meaty favourites. This is a trend we wholeheartedly welcome here at Dalriata – for many people, meat-free versions of popular foods is an important step towards reducing their personal meat consumption, with all the health and environmental benefits that brings.

Sure, meat-free burgers, sausages and the like are an increasingly common sight in supermarkets, and very enjoyable they are too. But surely there’s no substitute for something as intrinsically meat-based as good old black and white pudding? Think again!

Clonakilty’s Veggie Pudding is the latest addition to their pudding range.  Made using a mixture of black pulses and vegetables, it’s a delicious alternative to the meat-based Clonakilty black pudding and white pudding. In fact, for many of our customers it’s their first choice, whether they’re vegetarian or not. This innovative meatless pudding does a great job of replicating the texture of traditional meat puddings, and while the flavour is reminiscent of the originals, it also has a distinctive (and very tasty) character of its own.

Although Clonakilty Veggie Pudding is made using simple ingredients, such as gluten free oats, fresh onions, carrots, black beans and spices, the resulting taste is anything but bland. It’s a great addition to a traditional breakfast plate, but it will also bring something new and unique to many a vegetarian dish. With a little imagination, Clonakilty Veggie Pudding can be put to all kinds of uses. For example, how’s about a falafel?

So whether you’re vegetarian, vegan, or simply trying to cut down on meat, we think you’ll find Clonakilty Veggie pudding to your liking. Needless to say it’s also suitable for anyone on a halal or kosher diet. And if you’re coeliac or gluten intolerant, you’ll be pleased to hear it’s gluten-free too.

Be the first to review “Clonakilty veggie pudding” Cancel reply 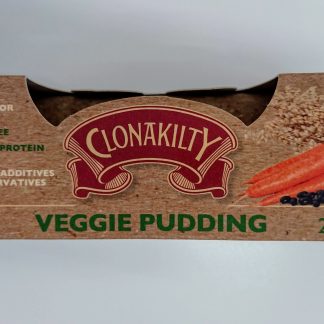 You're viewing: Clonakilty veggie pudding 3,90 € incl. VAT
Add to cart
Annoying Cookie Pop-Up
Is it OK if we use cookies to give you a better onsite experience?