Marmite has to be one of the most controversial foods on earth. This innocuous-looking jar, containing a substance described only as “yeast extract”, divides people like almost nothing else. Those who like it absolutely love it, and will move mountains to get their hands on it. To everybody else, it’s an abomination which has no place in any right-thinking household’s kitchen cupboard. At Dalriata, we would prefer not to take sides in this neverending debate, but we’re happy to offer it to our customers!

It’s funny how customers in our Berlin store always seem to want a different size of jar to the one we keep. Our many Marmite lovers know exactly what they’re buying, and want the biggest jar they can get their hands on. Then there are the, shall we say, Marmite-curious, who want to give this legendary savoury spread a try, but are reluctant to buy a big jar of something they might not like. We really can’t win! So we sell 250g jars, which seems like a good compromise.

It might surprise a lot of people to learn that this quintessentially British foodstuff was actually invented by… a German! (The same man invented the Oxo cube, but that’s a story for another page…) Justus von Liebig discovered a way to concentrate yeast left over from brewing beer, and the result was the salty, sticky, umami bomb we know and love(?) as Marmite.

If you’ve never tried the stuff, you should expect a strong reaction one way or the other. In the UK, Marmite marketing has for years embraced the fact that people either love it or hate it. In fact, for many British people the word “Marmite” has come to be used to describe anything which strongly divides opinion.

It’s very, very salty. But salt’s not the only thing going on here – Marmite is quite aromatic, with yeasty notes, but overall it’s reminiscent of a very thick, treacly soy sauce.

Marmite is 100% vegan, and it’s an excellent source of B vitamins for vegans and vegetarians.

How is Marmite eaten?

By far the most common way to eat Marmite is to spread it on toast as a snack. Every Marmite fan has their own preferences for this – some spread it thin, some apply it in clumps across the bread. But only the truly hardcore Marmite lovers spread it thick like butter – a mistake which many Marmite novices make, and which might explain why a lot of people are convinced they can’t stand the stuff! If you’re trying it for the first time, we suggest a very thin coating on your toast, so it’s not too overwhelming.

But Marmite is much more than just a savoury spread for toast. It’s a great way to up the umami impact of almost any dish. Try adding some to the browned meat when making chili con carne, for instance (sounds insane, but the great Kenji Lopez-Alt uses it in his recipe, and that’s good enough for us). Thinned out a little, it makes an amazing glaze for roasted vetables. It goes great with cheddar cheese, too. But its uses are not limited to savoury dishes – more adventurous Marmite fans will eat it alongside anything from avocados to their morning porridge. The sky’s the limit, get experimenting! 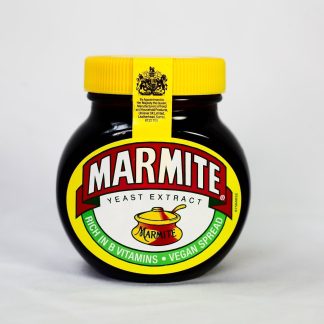 You're viewing: Marmite 6,90 € incl. VAT
Add to cart
Annoying Cookie Pop-Up
Is it OK if we use cookies to give you a better onsite experience?