What we have here is a true British icon. Lea and Perrins Worcestershire Sauce is one of the few foods from the UK which has become popular all over the world. And this success has come in spite of the fact that most people have a hard time pronouncing the name! Perhaps this is why it’s known simply as “sauce” in Japan…

Here in Eastern Germany, “Worcester Sauce” has a history of its own. A condiment by that name became popular in DDR times, and is still widely available today. But as any British person who has unwittingly bought some will tell you, it’s not the same at all! Although it looks similar to the original Lea and Perrins Worcestershire sauce, the “Dresden style” Worcester sauce couldn’t imitate the unique flavour of the real thing. Thankfully, the wall came down a long time ago and you can now buy the real thing right here at Dalriata!

Legend has it that Lea and Perrins Worcestershire Sauce owes its distinctive flavour to a mishap. As the story goes, its inventors were asked to replicate a sauce which an English nobleman discovered in India. Despite their best efforts, the result was pretty awful. The barrel they produced was was abandoned in their cellar and forgotten about. A year and a half later, they tried it again on a whim – and found that it had matured into something delicious! As a result, Lea and Perrins Worcestershire Sauce is still matured for 18 months to this day.

And what a glorious accident it is. There’s hardly a dish that Lea and Perrins Worcestershire Sauce won’t improve. A shepherd’s pie wouldn’t be right without a good splash of it. A spoonful or two of Worcester sauce will give your Irish stew a deeper, richer, heartier flavour. And don’t mention it in front of your Italian friends, but we think it works wonders in a ragú alla bolognese!

No doubt you have your own favourite uses for it. But one thing’s for sure – no kitchen cupboard is complete without a bottle of Lea and Perrins Worcestershire Sauce. 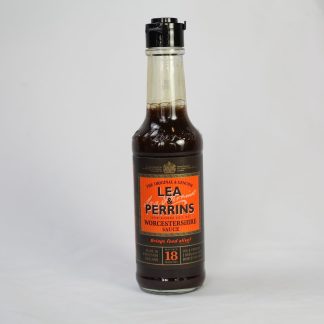 You're viewing: Lea and Perrins Worcestershire Sauce 3,90 € incl. VAT
Add to cart
Annoying Cookie Pop-Up
Is it OK if we use cookies to give you a better onsite experience?