The secret of great cakes.

Self-raising flour is right up there with malt vinegar when it comes to foods that are in every kitchen in Ireland in the UK, but nowhere to be found in Germany. It really comes as a shock that something so ubiquitous, so taken for granted, simply doesn’t exist here. Many of our customers who love to bake find themselves totally lost without it. They come to our Berlin store in a panic, asking if we have any. And of course, we do!

The self-raising flour we sell comes from renowned Irish miller Odlums. For over 150 years they’ve been milling Irish wheat on their premises not far from Dublin. Families throughout Ireland know the Odlums name is a byword for quality every time.

What is self-raising flour?

Despite its absence from shelves in Germany, self-raising flour isn’t some advanced technology that hasn’t found its way here yet. In fact, it was invented in 1845! There are no secret ingredients either – it’s simply wheat flour with raising agents added to it, which ensure that whatever you’re baking rises evenly and predictably. Of course it’s possible to add baking powder (also known as bicarbonate of soda) to plain flour, but it’s hard to mix the leavening agent into the white flour completely evenly. This could mean that whatever you bake rises unevenly. Another thing which catches people out is that German baking powder is weaker than what they’re used to at home, and adding a teaspoon or so won’t do much! Self-raising flour takes the guesswork out of baking and makes it much easier to get reliable, consistent results every time.

Why can’t I find self-raising flour in Germany?

Perhaps the question a German native would ask you is “Why would you want to?” After all, it’s just flour with some added baking powder. But if you’ve ever tried to replicate self raising flour by mixing type 550 flour and Backpulver, you know it’s tricky to get it right.

It seems to be something that has only caught on in the English-speaking world. People elsewhere seem to have managed just fine without it. But even though we think German bread is the best in the world, when it comes to cakes, the UK and Ireland have the upper hand. And self-raising flour might just be the reason for that…

What can I bake with self raising flour?

Odlums self raising flour is particularly well-suited to making all kinds of cakes. Muffins, cupcakes, sponge cakes, scones – you can rely on this flour to make all of these turn out great.

As well as being the perfect cake flour, It’s also an excellent choice for making biscuits and cookies. We’ve also heard of people using it to make pizza dough, but we must confess we haven’t tried that ourselves!

If you’ve been missing self-raising flour, and your cake-baking adventures have suffered as a result, fear not – Dalriata is here for you! 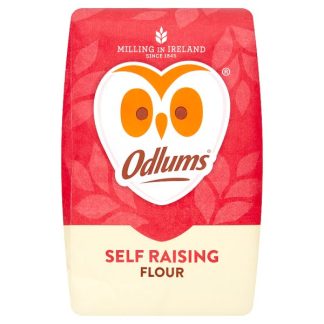 You're viewing: Odlums Self-Raising Flour 3,50 € – 4,90 € incl. VAT
Select options
Annoying Cookie Pop-Up
Is it OK if we use cookies to give you a better onsite experience?