When we were growing up, the unmistakeable red and white striped foil wrapper of the Tunnock’s Tea Cake was only seen on the biscuit plate when somebody was coming to visit. In our case, it was usually grandad on a Sunday, who would polish off an improbable quantity of digestives, custard creams and caramel wafers over the course of two or three cups of tea. Just sometimes, by the time he’d finished, there might be a teacake left on the plate, waiting to be snapped up by a hovering grandchild.

We know we’re not alone in the reverence we have for this little confection. Especially in Scotland, the Tunnock’s Teacake is not merely an everyday teatime biscuit. It’s something much more special than that. In fact, it’s become so iconic that it’s right up there with Irn Bru and haggis. For many Scottish folks, this is one of the tastes of home. They’re so legendary, they featured in the opening ceremony of the 2014 Commonwealth Games in Glasgow!

Now, our German customers might be thinking “But aren’t these just Schokoküsse?” And of course, we can understand why you might think that. But we assure you, these are a different, and much better proposition. Typically, Schaumküsse have a waffle base, and are filled with whipped sugar foam. The Tunnock’s Tea Cake, on the other hand, has a shortbread biscuit at the bottom, and the fluffy marshmallow filling is made from Italian meringue. This fondant uses a mixture of sugar and egg white, for a deliciously sticky tea time treat.

Just like Tunnock’s Caramel Wafers, these delicious treats have been around for a long time. It was invented by Sir Boyd Tunnock in 1956, who made a thin shortbread biscuit base, topped it with marshmallow by hand using a piping bag, and then coated the whole thing in melted chocolate. Nowadays they’re made in much greater numbers, and of course no longer by hand, but the taste is as good as ever.

And make no mistake – these are cakes, not biscuits. This was established in a famous court case which cost the British government around £3.5m in tax refunds, because biscuits are liable for VAT, and cakes aren’t!

Why deny yourself a little luxury now and then? Tunnock’s Tea Cakes are just as much of a treat now as they’ve ever been. Pick some up today and indulge yourself! 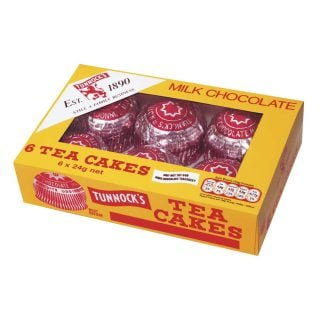 You're viewing: Tunnock’s Tea Cakes 6 pack 2,90 € incl. VAT
Add to cart
Annoying Cookie Pop-Up
Is it OK if we use cookies to give you a better onsite experience?