Cadbury’s is a name known all over the world for making delicious chocolate snacks. The company was founded in England in 1824, and to most people it’s a quintessentially British brand. But did you know that Cadbury’s have also been producing chocolate in Ireland since the 1930s? And that there are certain Cadbury’s products that you can only find in Ireland*, such as this Mint Crisp?

It’s made from the same creamy Cadbury’s Dairy Milk chocolate known and loved around the world (although, since this is Irish Dairy Milk, some people swear it tastes better!). This means, famously, “a glass and a half of full cream milk in every half pound”, or a less romantic but more understandable 426ml of milk in 227g of chocolate.

But, delicious as the chocolate is, the real main feature here is the crispy minty bits which give this chocolate bar its name. These consist of small chunks of mint-flavoured honeycomb scattered evenly throughout. Each Cadbury’s Mint Crisp bar contains a perfectly judged amount of this minty magic – enough to make things interesting without overwhelming the delicious Cadbury’s Dairy Milk chocolate.

Beloved in Ireland, and a big seller in our Berlin store, it’s a bit of a mystery to us why Cadbury’s Mint Crisp isn’t to be found in the UK. Our British customers usually aren’t familiar with it, and are often puzzled as to how we manage to find Cadbury’s chocolate bars that they’ve never even heard of. But it’s not hard to convince them to give it a try, and invariably they love it. And frankly, what’s not to love? It’s a bit like mint choc chip ice cream, but in reverse!

So whether you already know and love Cadbury’s Mint Crisp, or you’ve never tried it and are intrigued, why not add one (or a few!) to your shopping basket today? We’re certain you won’t regret it.

* Cadbury’s Mint Crisp might possibly on sale in South Africa too, we’re not sure… 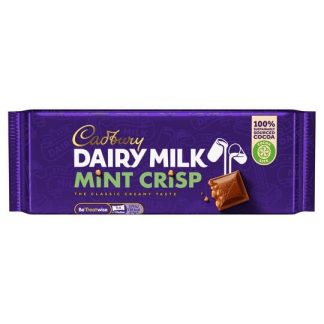 You're viewing: Cadbury’s Dairy Milk Mint Crisp 1,80 € incl. VAT
Add to cart
Annoying Cookie Pop-Up
Is it OK if we use cookies to give you a better onsite experience?