Ireland’s favourite black pudding, with over 130 years of tradition.

Clonakilty Blackpudding is probably the most famous and beloved Irish black pudding of all. It was created by a farmer’s wife called Johanna O’Brien in Clonakilty, Co. Cork in the 1880s, using a secret mixture of spices. Clonakilty Foods say that they’re still using that same secret recipe today.

Although there are many versions of black pudding from every region of Ireland and the UK, what makes this one extra special is that it is made with beef, not pork. This gives it an unbeatable flavour and texture that really stands out from the crowd.

Perhaps it’s this that makes it Ireland’s favourite, and a massive hit with our customers here in our Berlin store. Whatever their secret may be, the combination of beef, oatmeal, onions, beef blood and a secret blend of spices is absolutely delicious, with a perfect crumbly texture.

What is black pudding?

Black pudding is a special kind of blood sausage. Although similar foods exist in many parts of the world – Germany has Blutwurst, France has boudin, Spain morcilla, and so on – black pudding is native to the UK and Ireland. What makes it different from other kinds of blood sausage is that it contains a large proportion of cereal. Clonakilty use oats, but some manufacturers may use barley instead, or a combination of both. These oats are mixed with blood, suet, herbs and seasonings to create the delicacy enjoyed by so many.

Delicious, obviously!  If you haven’t tried it before, you might be surprised that it doesn’t taste like blood at all. It has a slightly nutty, savoury flavour with light spicy notes and a little earthiness from the oats. The texture is quite dry and crumbly, but soft at the same time.

How do I cook black pudding?

It’s easy! By far the most common way is simply to cut it into slices and fry it for a few minutes on each side. If you’re enjoying black pudding as part of a cooked breakfast, it’s most likely that it has been fried. Typically, all the components of an Irish breakfast are fried in the same pan. This way, not only does everything develop more flavour, it also saves on washing up!

But you can also try boiling it or grilling it, for all sorts of interesting possibilities.

What are some black pudding recipes?

The most likely way for black pudding to turn up on your plate is as part of a traditional cooked breakfast. It’s not only popular in Ireland, but also considered by many to be an essential part of a full English breakfast.

However, there’s so much more that you can do with it besides this well-known dish. Try adding a little crumbled black pudding to mashed potatoes for a deliciously savoury twist on an old favourite. It’s also an amazing accompaniment to some kinds of seafood, particularly scallops. You can use it as a stuffing for roast meats such as porcetta It makes for an exciting topping for burgers or pizzas, or can liven up any salad. We’ve even heard of a chef who makes scotch eggs from it! 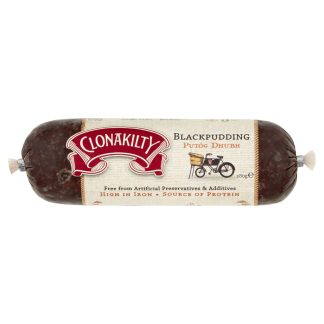 You're viewing: Clonakilty black pudding 4,90 € incl. VAT
Add to cart
Annoying Cookie Pop-Up
Is it OK if we use cookies to give you a better onsite experience?