We all know that Germany is the land of the sausage. In fact, some people might think we’re crazy to import Irish breakfast sausages to Berlin – isn’t it a bit like selling coals to Newcastle?

But great as German Wurst is in all its many and varied forms, there’s nothing quite like a proper British banger… except for a proper Irish banger! And we’ve got some great ones here courtesy of Clonakilty Foods, based in Co. Cork in southwest Ireland.

They’re made from quality Irish pork, using plenty of lean meat and just enough fat to guarantee delicious flavour and that juicy texture you know and love.

If you’ve been dying for a proper cooked breakfast, these are the perfect sausages for the job. They’ll make for a memorable full English, Ulster fry, or whatever you call it!

These Irish pork sausages are hugely popular at our shop in Berlin. They’re already well-known and loved by our many Irish customers, who often tell us they’re simply the best pork sausages on earth. They’re also increasingly popular with British sausage lovers, who may not be so familiar with the Clonakilty name, but know a good banger when they find one. And as for our German customers – well, needless to say they know a thing or two about sausages, and they sometimes take a little convincing. But Irish pork sausage have a small, fanatical following in this corner of the world, and we’re working on making it bigger!

This 8 pack contains 227 of sausages, or half a pound in old terms. If you’re of a certain age, you’ll notice that this means each sausage weighs one ounce! If you’ve no idea what an ounce is, suffice to these are fairly small sausages, but that just means there are more of them to go round. A pack of 8 should be enough sausages to make a good fry-up for two people. But if, somehow, you have any left over, you’ll no doubt end up snacking on them every time you go to the fridge – we know we do!

If you think this half-pound pack isn’t going to be enough for you, don’t worry, we also offer a 16 pack. 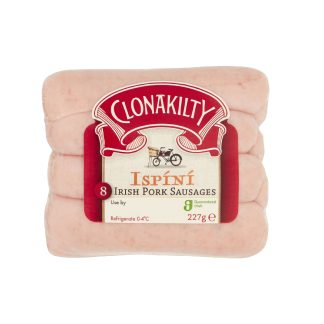 You're viewing: Clonakilty Ispini Irish Breakfast Sausages 8 pack 3,60 € incl. VAT
Add to cart
Annoying Cookie Pop-Up
Is it OK if we use cookies to give you a better onsite experience?