Only 4 left in stock

This handy pack contains one black and one white pudding. They might be a little smaller than the individual puddings, but they’re every bit as tasty.

Clonakilty Blackpudding was created over 130 years ago and today they’re still made to the same secret recipe. Unlike other black puddings, Clonakilty black pudding is made with beef instead of pork. This gives them a distinctive and characteristic flavour.

Maybe this is why Clonakilty black pudding is Ireland’s favourite. Certainly, its mixture of beef, oatmeal, onions, beef blood and a secret blend of spices is delightfully flavoursome, and the crumbly texture is perfect.

Black pudding is, of course, traditionally served sliced and fried as part of a traditional cooked breakfast. It’s not only popular in Ireland, but also considered by many to be an essential part of a full English breakfast.

However, there’s plenty else you can do with black pudding besides the obvious use in a fry-up. It’s much more versatile than many people realise, and modern chefs all over Ireland and the UK are discovering new applications for it all the time. For example, it pairs beautifully with scallops and pea puree.

White pudding may be less well-known outside Ireland and Scotland than its darker sibling, but it’s at least as tasty. In fact, some people even prefer it.

Clonakilty’s white pudding has been the finishing touch in a  full Irish breakfast for over three decades, and in that time has become a firm favourite all over Ireland. It’s developing something of a cult following in Germany too – though still fairly unknown, we have some fanatical devotees in our shop who buy them by the dozen!

Be the first to review “Clonakilty Mini Puddings” Cancel reply 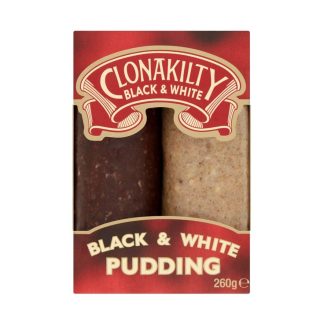 Thanks for visiting! We're only taking orders for in-store collection at the moment. We hope to launch our mail-order service soon. Dismiss