Although it may be less well-known outside Ireland and Scotland, white pudding is every bit as delicious as Clonakilty black pudding. In fact, for those who have already fallen under its spell, it’s often preferred to its more famous cousin.

Clonakilty’s version has been making full Irish breakfasts just a little bit fuller for over thirty years now, and in that time has become a firm favourite all over Ireland. Thanks to Dalriata, it’s now catching on in Germany too – we have customers who come to our store and buy them by the dozen!

If you’ve never tried white pudding, Clonakilty’s take on it is a great place to start. We’re sure you will enjoy its crumbly, oaty texture and gently spicy flavour.

What is white pudding?

At its simplest, white pudding is black pudding without the blood. Typically, it’s made using pork, and Clonakilty’s version is no different. Even though their famous black pudding is unusual for using beef, this time they’ve stuck to pork.

Dishes along similar lines to white pudding have existed for a very long time, possibly all the way back to the Middle Ages. Back then, meat was much more of a scarce luxury than today, and it was important to use every part of an animal. Products like black and white pudding, or haggis, are a great way to make something tasty out of some of the less appealing bits, mixing them with oatmeal, onions and various herbs and spices.

Nowadays it’s especially popular in Ireland and Scotland, but can also be found in parts of England and even as far away as the maritime provinces of Canada.

Fantastic, of course!  If you’re new to white pudding, you’re in for a treat. It’s like a subtle and delicately flavoured sausage meat, made more interesting by the addition of oats. The texture is quite dry and crumbly, but soft at the same time.

How do I cook white pudding?

It’s simple! The most common method is just to cut it into slices and fry it for a couple of minutes on each side. If you’re eating white pudding as part of a full breakfast, chances are it has been fried. Typically, all the components of an Irish breakfast are fried in the same pan. This way, not only does everything develop more flavour, it also saves on washing up!

It also lends itself well to boiling it or grilling, if that’s your preference. 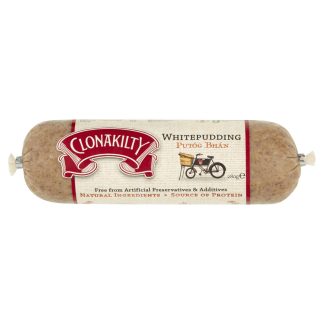 You're viewing: Clonakilty white pudding 4,90 € incl. VAT
Add to cart
Annoying Cookie Pop-Up
Is it OK if we use cookies to give you a better onsite experience?