We all know that Germany is the land of the sausage. In fact, when we came up with the idea to start Dalriata, some people thought we were out of our minds. “You’re going to import Irish sausages? To Germany? What a waste of time!”

German Wurst is great, we’re not disputing that. We aren’t trying to say that Irish sausages are better, or suggest that people start eating them instead of a good old Bratwurst. It’s just horses for courses. German Wurst will always have a special place in our hearts, but there’s nothing quite like a proper British banger…

Except for a proper Irish banger!

And we’ve got some great ones here courtesy of Clonakilty Foods, based in Co. Cork in southwest Ireland.

They’re made from quality Irish pork, using plenty of lean meat and just enough fat to guarantee delicious flavour and that juicy texture you know and love.

These butcher-style sausages are made to the a similar recipe as our breakfast sausages, but each one is bigger, thicker and, dare we say it, juicier. This makes them ideal for good old bangers and mash. And of course, if you prefer a bigger sausage as part of your fry-up, go right ahead and use these – the choice is yours!

What are the best Irish sausages?

That’s a tough question to answer, but you won’t be disappointed with our Clonakilty sausages. They’re renowned all over Ireland for their quality. Irish people know exactly what they’re going to get when they buy Clonakilty sausages. If you’re looking for a traditional, typical Irish sausage, these are the perfect choice.

In the UK and Ireland, you will sometimes hear people using the word “banger” to mean a sausage, especially thicker, fatter ones like these Clonakilty Butcher Style Sausages. This name comes from the cooking process. It’s common to stick a fork in the sausages before cooking to allow the air to escape, otherwise they can burst with a “bang”! Of course, some people think this popping noise is all part of the fun, and allow it to happen.

Irish and British sausages are closely related. Both are made from pork, using similar cuts of meat. They also tend to use many of the same spices and seasonings. If you like one, you will almost certainly like the other, too. So if you’re used to British sausages, give these Irish ones a try – we think you’ll love them! 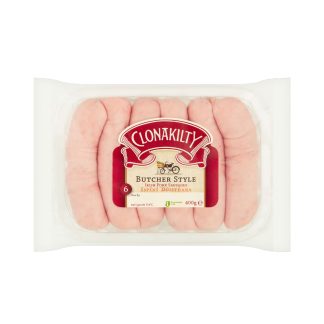 You're viewing: Clonakilty Butcher Style Irish Pork Sausages 6 pack 6,50 € incl. VAT
Add to cart
Annoying Cookie Pop-Up
Is it OK if we use cookies to give you a better onsite experience?